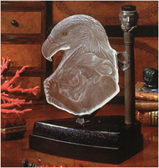 From his home in British Columbia, Canada, Thomas McPhee transforms gem material into jewelry-sized intaglio and small sculptures renowned for their detail and proportion. McPhee discovered ancient gem engraving at the Victoria and Albert Museum and carved his first gemstone in 1976. In 1992, he carved a fist-sized emerald weighing 1,550 carats, probably the largest fine emerald ever sculpted. Though he works in several media, including paint, wood, acrylic resin, and bronze, his first love is gem carving, a love evident in the care and attention he gives his pieces.

As a master of classical realism, McPhee brings a richly tactile quality and graceful and fluid style to his work. He combines both figurative and abstract forms in his art and often involves mythological themes and archetypes. He creates remarkable, museum-quality pieces by pairing archaic engraving methods with modern technology. Working from live models and using a dentist drill and hand tools, he achieves breathtaking detail in a variety of quartz and beryl.

McPhee's art has been exhibited at the Carnegie Museum of Natural History in Pittsburgh and the Lizzadro Museum of Lapidary Art in Chicago, as well as displayed in galleries worldwide. In the American Gem Trade Association's prestigious Cutting Edge Competition, he was awarded first place in 1994. McPhee's work has been praised in magazines from the Robb Report to the Concorde's Cafe Paradise and featured in journals worldwide such as Canadian Jeweller Magazine, National Jeweler, and a 12-part series in Lapidary Journal. In addition, works of art by Thomas McPhee grace private and corporate collections throughout the world, from Japanese industrialists to royal families in Europe and the Mideast.